Bicycle Motocross – widely known as BMX – is the riding of a bicycle about half the size of a regulation road or mountain bike. Typically, the bike has 20” wheels, a 21” frame and nine inch handle bars. There are currently five major BMX disciplines: park, street, dirt, flatland and racing. Racing aside, all are considered to be freestyle disciplines where the objective is to complete a series of tricks using the terrain available. BMX can trace its origins to 1950s Holland, where pictures show children imitating motocross motorbike riders on their bicycles. This led to the development of dirt courses specifically for Bicycle Motocross.It was in the United States that BMX became a sport in its own right. In the late 1960s and early 1970s, young people took their Schwinn Stingray bikes to dirt tracks all over California. Scott Breithaupt (1957-2015) - commonly referred to as the Godfather of BMX - was an influential figure in the sport taking hold in America. In 1978, Dutchman Gerrit Does founded the sport’s governing body: the International BMX Federation (IBMXF). BMX came to England in the 1980s, soon after the sport was born in the US. The first UK BMX team was Team Ace, founded by ex-motorcycle trials rider Don Smith and Richard Barrington. A stated aim of the team was to secure a future for the sport in the United Kingdom. Racing has been an Olympic sport since 2008 and the freestyle park and street disciplines will make their first appearance at the Tokyo 2020 Games. Today, the sport appears to be on an upwards trajectory in participation and publicity and is closely associated with alternative ‘skate culture.’

Kingfield Skate Park is situated just over the river in Hampton Wick in the east corner of King’s Field Park. Despite actually being in the Borough of Richmond upon Thames, it is widely referred to as ‘Kingston Skate Park’, owing to the fact that it is in very close proximity to Kingston Bridge and the town centre. In April 2011, the Skate Park was redesigned by Wheelscape to create one continuous loop, integrating a large bowl and multi-level plaza style street section.

In Conversation with Bobby

We caught up with Bobby, a BMX rider and regular visitor to Kingston Skate Park

What kind of things do you do on your bike?

Usually, we do freestyle tricks. There's also flat ground BMX, which is you spin on your front wheel multiple times, you kind of jump around your frame. The whole aim of it is to not fall off your bike while spinning around a million degrees. I do the freestyle kind of BMX, where we ride around the skate park, try to learn new tricks. There's stuff called bar spins, which you jump up in the air, spin your bars, catch them and land before dying. There’s also rotations. There's a lot of tricks to do with BMX. I do tricks with BMX because I find they're the most fun.

Was there a trick that was particularly satisfying to master?

Most likely bar spin.You jump in the air and you spin your bars in 360 degrees. You catch them before you land. That trick took me so long to master. Every other trick I slowly learned with time, but this trick I learned over the course of two years. The problem was I was doing it wrong. You're supposed to throw them to the left when you're left foot forward. But I was left foot forward and I was throwing them to the right. I did learn the bar spin to the right side but sadly it was really inconsistent. I never enjoyed doing it because I'd fall off most of the time. And then one day, my friends were like ‘Bobby, why don't you try bar spins to the left.’ I said,‘that's a good idea.’ After about an hour trying bar spins to the left, I'm destroying my shins with the pedal. Usually what happens is you slip a pedal if you don't catch a bar spin right. It goes to your shin. If you're not wearing shin pads you just fall on the ground and start crying most of the time because the pain is so excruciating.After an hour of trying bar spins non-stop, shinning myself, I finally caught a bar spin to the left. That moment was one of the most exciting moments of my life, I was like oh my god, I have conquered this trick. It's been a year since I learned it and I do it everywhere. People always call me Bar Spin Bobby and like why you only doing bar spins? I just say it's fun. It's really fun just going up in the air 360 degrees, catching it and continuing like nothing just happened.

Do you wear any protective gear?

Well, when I started BMX, I didn't wear anything. Not a helmet, shin pads, elbow pads, nothing. Now people do that as well. People don't wear any helmets and no protective gear, and I think that's really stupid. About a year ago I started wearing a helmet, because I saw one of my friends jump over this fence and his back wheel caught and he got shot to the ground. It was really terrifying. The ambulance had to get called. He was bleeding out of his nose, he threw up a few times. After that I kind of stopped and thought maybe I should wear a helmet because my head is the most important thing in my body. I can live without fingers or an arm. Now every time I go ride, I wear a helmet. I've been considering wearing shin pads as well because shinners don't happen that often, but when they do, you sit there for five minutes in pain trying to rub your shinner. You're just thinking why do I not invest in shin pads, they cost 30 quid, why do I just not buy them and save myself the pain. At the same time, it might sound a bit stupid, but the pain is a part of BMX. It's sometimes nice to get reminded that you're not invincible doing what you do. You can get hurt. You have to be careful.

So the risk is part of the sport?

Yeah, definitely. Every time I go ride there's always a thought in the back of my head thinking I could get seriously hurt and possibly not be able to walk or not be able to move my hand for a few days. That's kind of the risk that comes with BMX, especially when you go out street riding. At Kingston Skate Park, I know every quarter, I know how to air the quarter. I know how to approach a gap in the way that I'm not gonna get hurt. When you go out street riding, you never know, because you could go to a spot you've never been to, and you go fair enough, I'll try it. If it goes wrong, it could go possibly very wrong. You can end up at hospital. I've seen my friends end up in hospital quite a few times and it is definitely a risk. That's why I try to be a bit more careful now when I ride.

What about the positive side?

The rewarding feeling of BMX is why I'm still doing BMX. If I wasn't getting any reward out of it, I wouldn't be doing it. I guess the reward itself is riding your bike every day. That's one of the fun things about BMX; you can just jump on your bike and forget about all your problems. That's why I've had a lot of problems recently, because I haven't been riding my bike. The weather's been awful. Definitely, when you learn a new trick or do a new line or really high up in the air that’s what gives me a rewarding feeling. For me, when I air quarter very high, that's what makes me feel like wow I'm actually flying in the air with a bicycle, that's not meant to happen, but it is happening. The higher I go, the more adrenaline I get. Adrenaline is always a very nice feeling. It comes with BMX. Sometimes it's very, very scary, but sometimes it's very nice to feel adrenaline.

Tell us about Kingston Skate Park

They rebuilt it about six years ago. I wasn't even in this country when they rebuilt it. Before then, it just used to be a very simple skate park. They completely redesigned the whole skate park because of some accident with the ramps. Now it's a lot more fun, there's a jump box, a spine, a bowl. People are probably wondering, a bowl in a skate park? Are you gonna eat cereal in the skate park? There's a street section as well, which means there's rails, ledges, small quarters, banks most of the time.I'd say that's my local, even though around the area I live in, I live in Chessington, we have two skate parks closer to me than Kingston. Kingston is four miles away, but I consider Kingston my local since all my friends go there. I pretty much know everyone there, and I just get along with everyone there. 

Does it get busy down there?

Oh, god, yes. It does get busy, on weekends especially. After 4pm, when the kids get out from school, it is hell to actually ride in there, when there’s so many kids, especially scooter riders. I'm not going to bash on them, but they are very annoying because they're still kids, they have no idea what they're doing. They get in front of you, especially while you're riding. If you're in the bowl, going seven feet high in the air, and then you're landing and you're about to go to another ramp, and on the other side of that ramp there's a kid with a scooter. You're sitting there thinking oh god this is not going to end well. I've had multiple collisions at Kingston, just with scooter kids.

I'd say the relationship between skateboarders and BMX'ers is better than most skate parks I've been to. When we go to South Bank, we get a lot of dirty looks, we get people looking at us, looking at our bikes and going they shouldn't be here, even though BMX has grown up with skateboarding and South Bank. At Kingston, BMX'ers and scooters don't get along. Skateboarders and scooters don't get along either. So I think we all just kind of unite against scooters. It's not a bad thing, there are some amazing scooter riders, but not in Kingston.

What about the other skate parks in the area...

There's one called Tolworth Bowl, which is just a bowl and a ledge. I know a lot of people that love that skate park. I don't understand why. It's just this small bowl that’s very tight to get around, especially on a bike. It's just excruciatingly scary to ride there, because you don't know if you're gonna slip out or go too fast, go too slow. My friends love that skate park, I guess because it gives them a thrill. I don't like it as much because I struggle to find lines to do there. I struggle to just have fun there. The other one is called Water's Edge or Cox Lane in Ewell. I don't like going there because I broke my front teeth there, both my front teeth. I had to stay with broken front teeth for two weeks because of that skate park, so I don't like going there…

Listen to the Interview 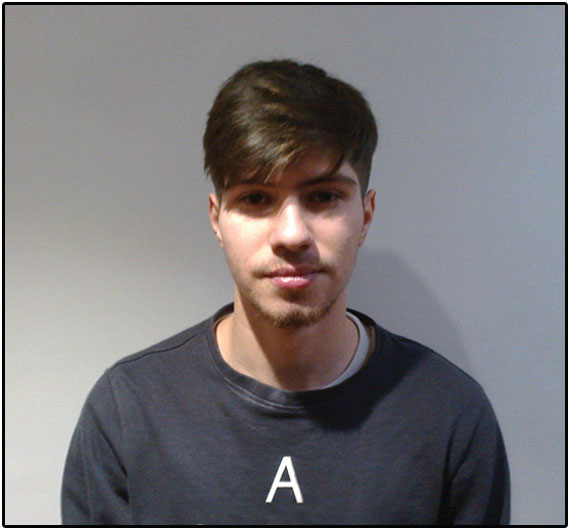 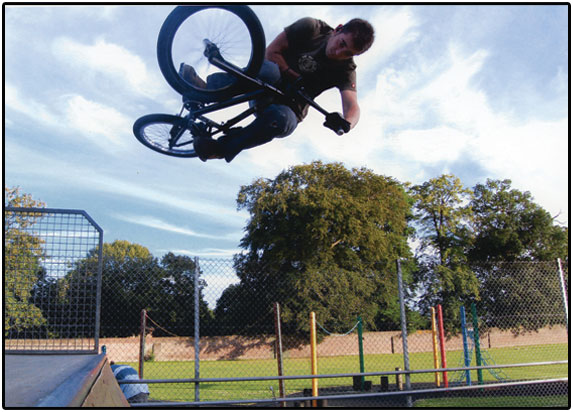 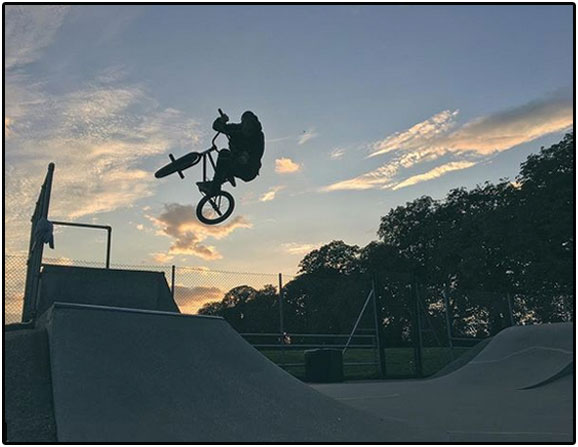 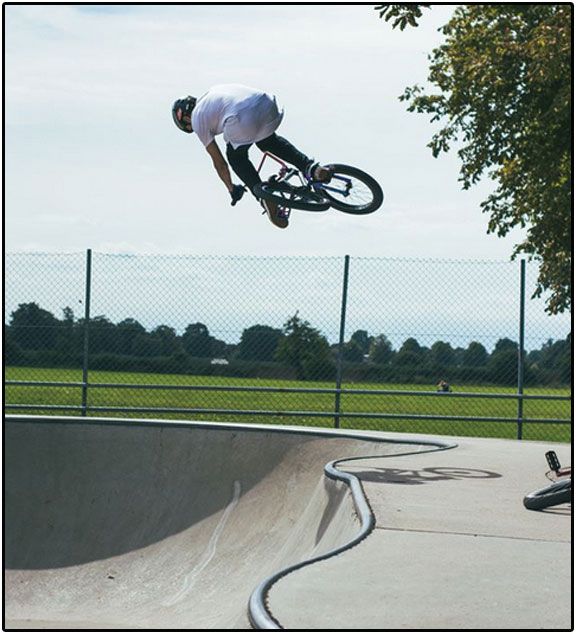